It’s hard to believe that I brought Deuce home 3 weeks ago with the expectation that we would have him home for a very short time before he got his angel wings! Our goal was to give him as much love and comfort as possible so he would know just how important he was to us and our family. Deuce was visibly happy to be home, but it was evident how weak he had become and the 1 hour drive home from Raleigh had taken it’s toll on him. Rob, one of our sons, had come from his home in Southern Pines to make arrangements to have oxygen tanks at the house in case Deuce needed it. His pneumonia was still raging and they had to give him oxygen at NC State after we got him into the car. Dr. Tuohy, Deuce’s surgeon, thought it would be a good idea to have the oxygen on hand, just to be safe. They had left his nasal cannula sutured in place in case we needed it. Deuce also had a jugular venous access in case our local vet needed it for euthanasia (his veins had been depleted during his 18 days in the hospital. He also had a foley catheter, so it would be easier for us to manage his urine output. That first night was long and tense, but we made it through.

Deuce continued his decline until Monday evening when he began  to turn around.  He sat up, ate and drank. Deuce had had minor rallies before, so we tried not to get too excited. But on Tuesday morning he seemed to be even stronger. Bobby and I continued to turn Deuce every 2 hours,  did passive range of motion every 3-4 hours along with massage, and we did coupage every few hours. I also dressed his pressure sore frequently. When our vet came on Tuesday morning, she was surprised at how good he looked. We decided to put him back on antibiotics for the pneumonia. Deuce was now eating small meals and drinking water.

We were all amazed at his progress that first week. But, that was nothing compared to the past 2 weeks. Deuce now gets up and goes all over the house. He loves being able to go in the kitchen to his water dish and help himself! One person can take him outside now and he walks around the front yard. He walks to my car and wants to get in and go for a ride! He gets up and comes to my chair just to snuggle!

We know he still has a long way to go, but he is such a fighter that we think he he will continue to look this beast in the eye and tell it, “Not today, and not without a fight.”  He channels Jimmy V and says, “Don’t give up, don’t ever give up!”

I attached a video from last weekend of him walking.

Thanks so much for your support, love, prayers and positive energy. You have made a difference! 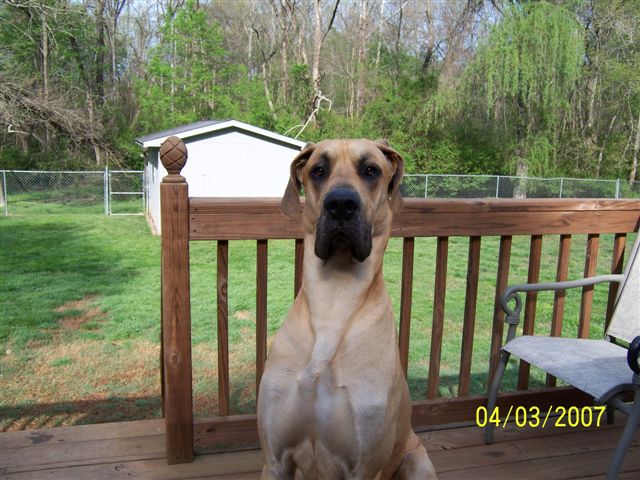 Deuce is a 7 1/2 year old Great Dane! He was diagnosed with suspected osteosarcoma on April 13, 2013 with confirmation on April 24th by the NC State Veterinary Health Care Complex in Raleigh, NC. His right front leg was amputated on May 1. His amputation was uneventful. Deuce was a challenge for the hospital staff because he weighed 215 pounds pre-surgery. On Friday, May 3, as they were attempting to walk him with a sling and lift, all of his weight was allowed to drop against the sling and he suffered a bladder rupture and uroabdomen, necessitating emergent surgery to repair his bladder. The second major surgery in 2 days took a lot out of him and he would not eat. After much discussion it was decided to place a NE tube for tube feeds. On the second day of tube feeds Deuce aspirated and developed pneumonia. This latest development seemed to take all the fight out of him and we were lucky to get a small tail wag when we visited. Deuce continued his decline and his heart rate became very high and irregular. A cardiology consult showed his heart was taxed by the stress of the infection and surgeries. After 2 weeks in the ICU we decided to bring Deuce home so he could live his final hours/days at home with his family.  Deuce came home with a foley catheter and a jugular catheter. I gave him IV fluids over the weekend, but they did not seem to make him feel any better. Initially, our vet was going to come to our home on Monday, May 20th. We had difficulty arranging transport to the crematory, so we rescheduled Deuce’s journey to the Rainbow Bridge for Tuesday morning.

On Monday evening, Deuce sat up on his bed and drank water. We then offered him food, which he ate! His first meal was Vienna sausages. We decided to have our vet check Deuce in the morning and see what she thought. He continued to drink water and eat over night. When she arrived Tuesday morning, our vet was amazed at what she saw! While still very weak, Deuce was interacting with us and sitting himself up. We decided to restart his antibiotics and heart medication and see what happened. Our big boy continued to improve and we took him outside on Friday, May 24…the first time he had really been up since we brought him home. He was a heavy 3 person assist, but we got him out and he rested in the front yard for a few minutes before we brought him back inside. He immediately wanted to rest on his bed and slept a few hours.

That was the real turning point for him! Each trip out (we limited him to once a day) was easier for him. Then on Thursday, May 30, he got up and took a few steps on his own! Our vet came out on Friday and removed his foley. This gave him a sense of freedom and he began moving around more. By Sunday my husband and I were able to get him out alone and by Monday afternoon he was a 1 person assist! He now regularly gets himself up and walks alone!

Deuce has had people praying for him and sending him positive energy since this journey began. Thanks so much to all the friends and strangers who have played such an important role in his recovery!

I’ve created this blog to celebrate his recovery and so that others can follow his incredible journey as he fights this beast! I also hope it will give hope to those who find themselves in the same battle.

Add an excerpt to your posts to provide a summary for readers in many blog themes!

Welcome to Tripawds. Please read on for important tips. This is your first post. Edit or delete it, then start blogging.

Be sure to check out your default sidebars for helpful tips to make the most out of your new Tripawds Blog!

Don’t miss our helpful WordPress tutorial videos if you need help getting started with your new Tripawds blog.

Please publish a new post (or edit this one) to share your story. The Tripawds community is only notified of new blog posts in the Recent Posts widgets found throughout the News blog and discussion forum pages. Members will not be notified of any comments made on this default first post. You can also choose to edit or delete your sample page.

NOTE: If you edit this post, be sure to modify the “Published” date and change the post author to your username from the Author drop-down menu on the edit page. That way you will be notified of any comments you receive so you can approve them.

By default, any first comments made on your blog will require moderation in an effort to limit the amount of spam you receive. Be sure to “Spam” any inappropriate comments, and approve those from your readers. You can change your comment options from the Settings -> Discussion tab in your dashboard.

See the Help videos or post in the Tech Support forum with any questions.

By default your site will be indexed so Tripawds members will be notified of your update in the Recent Posts lists throughout this community. If you change your Privacy settings to discourage search engines, your posts will not be indexed! If for some reason you do not want your posts indexed, consider starting  forum topic to share your story and reply there with links whenever you publish new blog posts.

Thank you for sharing your story, and happy blogging!